The image below shows a sundial found in the fortified town of Carcassonne in southern France. The sundial was made in 1961 (ANNO DMI MCMLXI, with a a mark to indicate the abbreviation of DOMINI) by René R. J. Rohr (RRJ ROHR FECIT).

The motto, CARPE DIEM, is one of the best known Latin phrases today, and it is often found on sundials. The words come from a poem by Horace: carpe diem, quam minimum credula postero; seize the day, trusting as little as possible in what will come next. You can read the entire poem in Latin and English at this Wikipedia article.

The photo is by fdecomite at Wikimedia Commons: 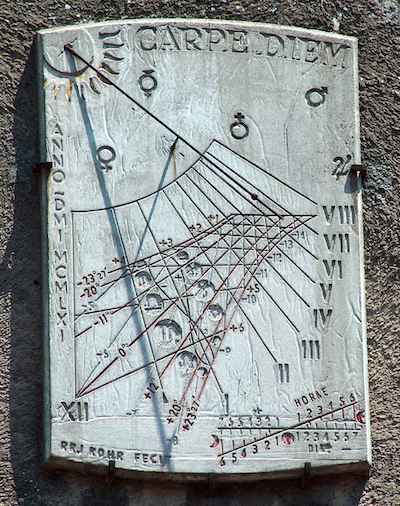