Here is a round-up of today's blog posts - and for previous posts, check out the Bestiaria Latina Blog archives. This will be my last Bestiaria post for 2010, but I will see you back here on Saturday when it will be the year 2011... Faustum annum novum vobis omnibus exopto!

HODIE: ante diem tertium Kalendas Ianuarias (and yes, you can have your own Roman Google Calendar).

HOLIDAY SONGS: The Latin holiday songs for today are: Frigus vir nivis, a Latin version of "Frosty the Snowman," along with In Dulci Iubilo.

FABULAE FACILES: The new easy-to-read fable is Carbonarius et Fullo, the paradoxical story of the collier covered in coal and the fuller who cleans wool.

BESTIARIA PROVERBS: There are some new animal proverbs today for FORMICA, the ant, and MULUS, the mule.

MILLE FABULAE: FABLE OF THE DAY: The fable for today is Equus Superbus et Asinus, a story of "how the mighty are fallen." (You can also a free PDF copy of the Mille Fabulae et Una book - and there's an English fable of the day, too.)

MILLE FABULAE: ILLUSTRATIONS: The latest fables with images are Corvus et Vulpes Mortem Simulans, about the fox who tried to fool the crow by playing dead, and Struthiocamelus et Alauda, which tells how how the lark learned not to envy the ostrich.

GOOGLE BOOKS: Today's Google Books are Schottus' Adagia, sive Proverbia Graecorum (an incredibly useful book!) and Offelen's Symbola et Emblemata, prepared for the Czar of Russia himself, Peter the Great, and printed in 1705 (so, yes, it is a polyglot emblem book not just in Latin and various western European languages, but in Russian, too).

Tiny Mottoes: Today's tiny motto is: Annuit coeptis (English: He has favored our beginnings - a good motto as we approach the new year).

For an image today, here is something to accompany Annuit coeptis, as shown on the American dollar bill: 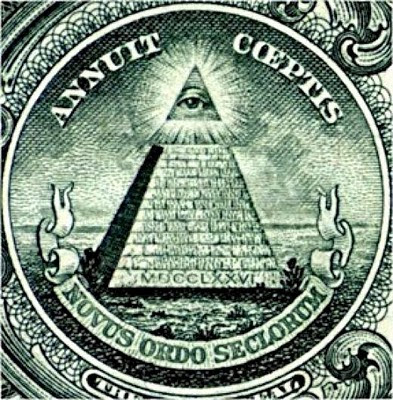