The Sabine Women Make Peace. To find out more about the early Romans and the Sabine women, see this Wikipedia article: link; for information about the image: image source.

The painting is by Jacques-Louis David (1748–1825; Wikipedia has a great account of the dramatic moment in David's life when he conceived this painting) and depicts the dramatic moment when the Sabine women make peace between their Roman husbands and their Sabine fathers and brothers. The story of the "Rape of the Sabine Women" is the most famous episode in these events; that story tells how Romulus and his mostly male comrades had founded the city of Rome, but the men needed wives. Romulus therefore staged a festival and invited his Sabine neighbors to attend, men and women alike. During the festival, Romulus gave the signal and the Roman men grabbed the Sabine women and ran off with them; the Sabine women where then forced to marry their Roman abductors.

Later on, the Sabine king Titus Tatius led a war against the Romans, but the women intervened, which is the scene you see depicted in this painting - the women brought the war to a halt, and Titus Tatius and Romulus then ruled over Rome jointly, with the Sabines becoming part of the Roman community. Here is a detailed view of the central woman in the painting as she reaches out her arms in order to secure the peace: 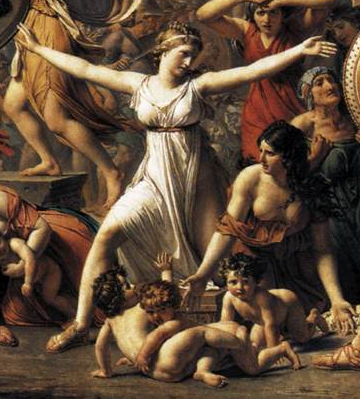 You can find more myths and legends for the week of December 25-31 here. For more information and links to the actual javascript code, see the Myths & Legends Widget Reference Page.