HODIE: ante diem nonum Kalendas Iunias. You can add a Roman calendar as a widget in your blog or webpage, or display it as a Google Calendar: here's how.

MORE FABLES: Here are today's fables from the Ictibus Felicibus project. These fables ALL have long marks, plus stress marks for easy reading, and the poems have meter marks, too, along with an easy-to-read prose presentation of the story:
I've picked out my favorite one, the story of the discerning donkey, Lupus, Lex eius et Asinus, to share with you here in the blog:

3-Word Mottoes: Today's 3-word motto is Alis aspicio astra (English: Rising on my wings, I gaze at the stars - which sounds very nice in Latin, with the alliteration).

Vulgate Verse: Today's verse is Nos debemus alterutrum diligere (I John 4:11). For a translation, check out the polyglot Bible, in English, Hebrew, Latin and Greek, at the Sacred Texts Archive online.

Elizabethan Proverb Commentary: Here is today's proverb commentary, this time by Taverner: Sub ipsius iudicio sorex perit: The Rat dieth by utteryng of her self. This Proverbe toke the beginning of the propertie of this vermin for the Rattes be wonte to make a noyse muche more than mice do, and do more rumble about and make a noysom crieng while they gnaw candels endes or such other trifels to whiche noyse many men harkeninge forthwith though it be in the darke night throw at them and to kill them. Semblably many men and women there be which by theyr owne noyse, and be wraying of them selves, seke their owne bande and destruction.

Today's Poem: Today's poem is one of those epigrams from Owen (4.115), with a word list at NoDictionaries.com:

English: "That which kings fear to hear, and servants fear to say, rumor itself tells you: memento mori." I decided to just leave that memento mori in Latin - and check out this Wikipedia article about the artistic tradition that goes by this name.

For an image today, here is an ancient Greek depiction of a shoemaker, an illustration for the story of Hermes and the shoemakers, Mercurius et Artifices: 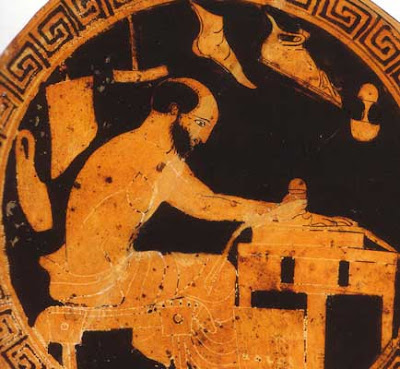