As you can see, I've been unsure how to merge this blog with my work over the past few years since I stopped working on Latin. I'm pleased to announce that my latest project has a place for Latin... so, welcome to the first Centum Verba post!
Over the past year, I've been writing books of 100-word stories (you can find out how/why I started this project). So far I've published six books of stories — Nasruddin, Aesop, India, Sufis, Anansi, Ramayana — plus a Teaching Guide. Those books are free OER: read, and remix too if you want!
I'm going to be carrying on with this project in the future, and since I'll be retiring from my job at the University of Oklahoma after the Spring semester, that will give me even more time for writing. Next up is a Mahabharata book, and then Brer Rabbit.
And today I got to thinking: why not do some "centum verba" project in Latin? One hundred words goes a LONG way in Latin. When I wrote the Mille Fabulae et Una book, I made sure none of the fables were longer than 120 words. So, for a few fables in the book, I'll need to trim them down to 100 words, but for most of the fables, I can actually expand them, with lots of repetition and rephrasing that will help beginning Latin readers. So, just as I did a "Tiny Tales of Aesop" book in English with two hundred of these tiny stories, then maybe I can do a "Fabellae Aesopi" in the same style, with two hundred tiny stories.
So, here is the first story. I will provide the original version from the Mille book, the 100-word version, and also an English fable in 100 words — not a translation, but a 100-word story inspired by the Latin fable. I'll try to do several each week so that I can have a Latin book before next Christmas. :-)
Centum Verba: Leo et Canis
Ecce canis!
Canis pinguis est, et nitidus.
Ecce leo!
Leo pinguis non est.
Leo inedia exhaustus est.
Occurrit canis leoni.
Canis, iocans, leoni dicit,
“Miser es tu, leo!
Exhaustus inedia es.
Quid percurris silvas?
Quid percurris devia?
Specta me!
Miser non sum.
Pinguis sum canis!
Nitidus sum canis!
Quomodo haec bona consequor?
Haec bona non labore consequor.
Haec bona otio consequor!
Leo cani dicit,
"Tu, canis, habes epulas; verum est.
Epulas habes, sed etiam vincula habes.
Stolidus es, canis, et servus!
Specto te, stolidum servum.
Servus esto!
Tu servire potes.
Ego liber sum.
Ego servire non possum, nec servire volo." 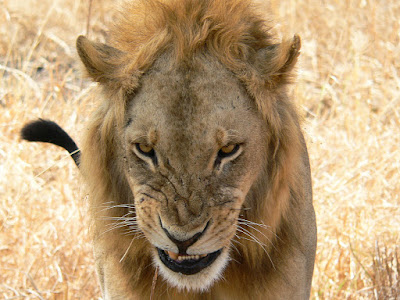 leo
Mille Fabulae et Una: Leo et Canis
Occurrit canis leoni et iocatur, “Quid tu, miser, exhaustus inedia, percurris silvas et devia? Me specta pinguem ac nitidum, atque haec non labore consequor, sed otio.” Tum leo, “Habes tu quidem tuas epulas, sed habes stolide etiam vincula. Tu servus esto, qui servire potes; equidem sum liber, nec servire volo.”
100-Words: The Dog and the Lion
A dog ran into a wretched-looking lion and decided to make fun of him. "Look at you!" said the dog. "Worn out with hunger, wandering through the woods and out-of-the way places! Then look at me, fat and sleek and shining because I lie around all day, not doing any work, just eating."
Then the lion replied, "Enjoy your feasting, fool that you are! You have a collar on your neck so the humans can chain you up whenever they want. Be a slave, if that's what you want; I, meanwhile, am free, and I will not be a slave."
Posted by Laura Gibbs at Friday, December 25, 2020