This is a sundial in a building on Brick Lane in London. The building is now a mosque, but originally it was a chapel (La Neuve Eglise) built by the Huguenots in 1743. In 1809 it became a Wesleyan chapel, and then a Methodist chapel in 1819. In 1891 it became a Jewish synagogue (Spitalfields Great Synagogue) serving Eastern European refugees. In 1975 the synagogue was relocated to Golders Green, and in 1976 the building was reopened as a mosque (Brick Lane Jamme Masjid) serving the local Bangladeshi community. What a procession of faiths!

The sundial is dated 1743 and so belongs to the original building. It has the motto UMBRA SUMUS, "we are a shadow." The words come from an ode of Horace (4.7). You can read the entire poem in Latin and English online. The stanza in question poses a lovely contrast between the moon's renewal and our own mortality:

The moons, however, quickly repair their heavenly losses; when we have fallen to where Father Aeneas fell, and wealthy Tullus and Ancus, we are dust and shadow.

(Aeneas is the Trojan hero who founded the Roman people; Tullus Hostilius and Ancus Marcius were the third and fourth kings of Rome.) 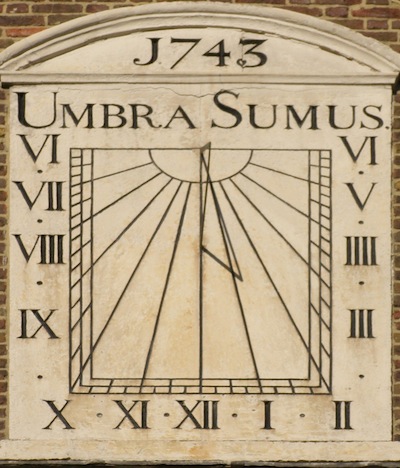 You can see the placement of the sundial here in this photo by Russianhouse at Wikimedia Commons: 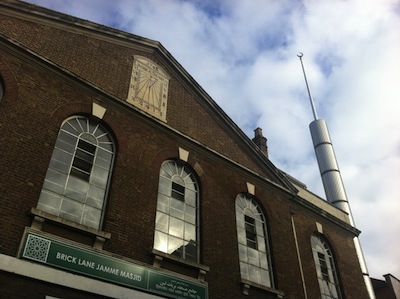