I was attracted to this sundial because of the DNA double helix that decorates it. The sundial is located in Redu, Belgium. As you can see the sundial is dated 2001 and bears the name JJ Baron (Jean-Jacques Baron). The image is from Wikimedia Commons: 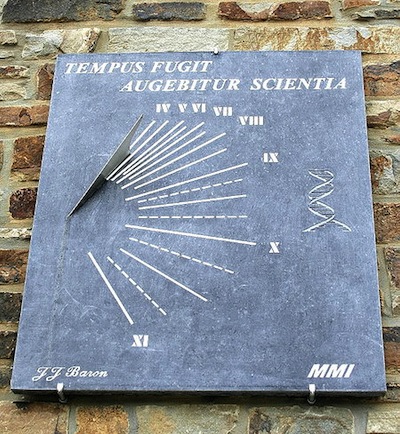 Here is a close-up of the DNA double helix: 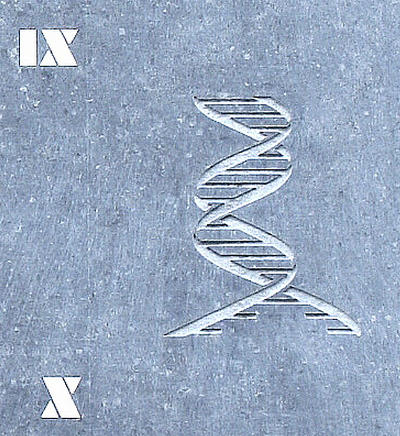 The DNA double helix as a visible sign of science complements the Latin motto's optimistic invocation of science:

The tempus fugit motto is commonly found on sundials, but the augebitur scientia motto is not common (although Gatty does cite an example: "On the house once occupied by Cuvier at the Jardin des Plantes, Paris"). The words come from the Bible, Daniel 12:4, but the textual tradition here is very tangled. The Catholic Vulgate reads plurimi pertransibunt, et multiplex erit scientia while the Latin version of Tremellius and Junius reads percurrent multi et augebitur cognitio.

We owe the mixed augebitur scientia to the title page of Francis Bacon's Instauratio Magna of 1620 which reads: Multi pertransibunt et augebitur scientia, "Many shall pass through, and knowledge shall increase," with an image of two ships sailing on the ocean, setting out beyond the Pillars of Hercules. 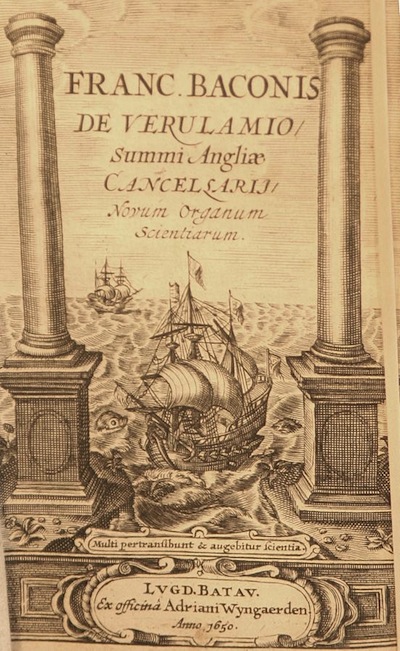 Jean-Jacques Baron, the creator of this sundial, has elegantly substituted the standard tempus fugit phrase for the first part of the motto to create something new, very appropriate for a sundial and very appropriate for science too, as symbolized the DNA double helix. I suspect Francis Bacon would approve!