Myths and Legends: Zeus and Semele

Zeus and Semele. To find out more about Semele, the mother of Dionysus, see this Wikipedia article: link; for information about the image: image source.

The painting depicts the dramatic moment in which the mortal woman Semele has recklessly asked her love Zeus to show himself to her in all his splendor. Zeus was bound to honor her wish, but no mortal can gaze on Zeus in his glory; Semele was instantly killed by the fire and lightning of his presence. Semele was already pregnant with their child, Dionysus, whom Zeus rescued from her body (you can see the blood dripping from her side) and then sewed into his own thigh. For this reason, Dionysus is sometimes called the "twice-born god," διμήτωρ or διμήτριος.

This amazing depiction of Zeus with his lover Semele is by the French Symbolist painter Gustave Moreau; the painting has its own Wikipedia article which provides some help in identifying the many allegorical and mythological figures incorporated in the painting. Below is a detail of Semele herself, for example, which allows you to see a weeping angel or Cupid just below Semele, to the left. 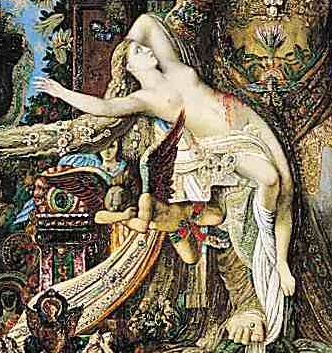 You can also find more myths and legends for the week of December 18-24 here. For more information and links to the actual javascript code, see the Myths & Legends Widget Reference Page.