Myths and Legends: Ajax and Cassandra

Ajax and Cassandra. To find out more about the Trojan princess Cassandra, see this Wikipedia article: link; for information about the image: image source.

In the image below, you see one of the most dramatic scenes from the downfall of Troy. The Greek have entered the city, concealed as they were in the wooden horse, and have caught the Trojans entirely by surprise. The Trojan princess Cassandra, who had foretold the disaster (although no one believed her), has fled to the temple of Athena for protection. In the image you can see her clinging to the Palladium, the sacred image of Athena, while the Greek warrior, Ajax the Lesser, pulls her forcibly away. Here is a detailed view of Cassandra as she clings to the statue of Athena: 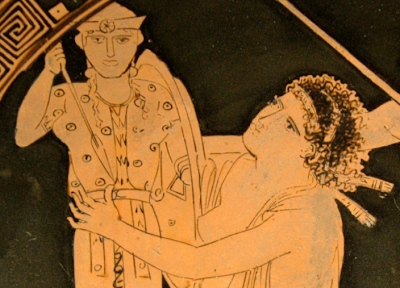 You can read more about the fall of Troy in Vergil's Aeneid, Book 2 - Aeneas is telling the story in first person to Queen Dido, which makes the events even more dramatic! For more about Cassandra's life and her prophetic powers, see this Wikipedia article. You can also find more myths and legends for the week of December 11-17 here. For more information and links to the actual javascript code, see the Myths & Legends Widget Reference Page.