Myths and Legends: Odysseus and Circe

Odysseus and Circe. To find out more about Circe, see this Wikipedia article: link; for information about the image: image source.

Today's image is a captivating depiction of Odysseus and Circe - with Odysseus' companions in their animal forms. Marvelous! It comes from the Nuremberg Chronicle. This is an English translation (which I found online here) of the accompanying text:

"When Ulysses [Ulixes] (as Augustinus and Boecius write) returned from the Trojan War he travelled ten years over the sea and finally came to Italy next to Sicily to an island, there lived Circe, the black sorceress, a very beautiful woman, who was called the daughter of the sun. She made by her skill and sorcery a drink by which - according to her intention - all who drank from it were transformed from human nature into beastlike shape. Now she handed this drink to the companions of Ulysses and turned so one of them into a wild pig, this into a lion, the other into a stag. But Mercurius has given Ulysses a flower which served against such skill and sorcery. And because she couldn't do harm to him he compelled her with his bare sword to bring his companions to their former shape. Solinus writes: This Ulysses has built the city of Olissipo [Lisbon] in Spain and called after him."

Ulysses is indeed holding the flower in his hand, as you can see here: 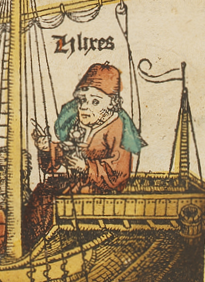 You can also find more myths and legends for the week of August 12-18 here. For more information and links to the actual javascript code, see the Myths & Legends Widget Reference Page.