HODIE: Nonae Iuliae, the Nones of July (and yes, you can have your own Roman Google Calendar).

VERBUM HODIERNUM: Today's word is VALEO - read a brief essay about the word at the Verbosum blog. Here's one of the sayings you can find in the essay: Non vivere, sed valere vita est, "Life is not to live but to be strong."

LATIN AND ENGLISH FABLES: Here are today's fables in Latin AND English from the English Aesop project.
I've picked out my favorite one to share with you here in the blog, Belling the Cat = Mures, Feles et Tintinnabulum:

Once upon a time the mice were trying to decide how to keep themselves safe from the cat. The various mice proposed all kinds of plans, but none of them met with general approval. Finally one of the mice said, "A bell should be tied to the cat; then we will hear right away when he is coming and we'll easily make our escape." They all praised this wise mouse, delighted by the plan he had proposed. "So go ahead and tie on the bell," they said. The mouse replied, "I am the one who came up with the plan; let someone else put it into operation." So the plan turned out to be a failure, because no one could be found who was willing to bell the cat.

Latin Animal Proverb: Today's animal proverb is Dimittis pullos sub custodia vulpis (English: You are leaving your chicks in the care of the fox - definitely not a good idea, as you can tell from the story of the fox and the rooster cited above).

Proverbs of Polydorus: Today's proverb from Polydorus is: Semper aliquid novi affert Africa (English: Africa always brings forth something new - a good saying during the days of the World Cup!).

Proper Name Proverb from Erasmus: Today's proper name proverb from Erasmus is Lampon iurat per anserem (English: Lampon swears by the goose; from Adagia 4.1.34 - Lampon was a proverbial priest who would swear "by the goose," rather than invoking a god, since if Lampon later broke the oath, he could do so with impunity, having nothing to fear from a goose).

Greek Proverb of the Day: Today's proverb is Ἐλέφαντα ἐκ μυιᾶς ποιεῖς (English: You're making an elephant out of a mouse - something like our saying about making a mountain out of a molehill).

For an image today, here is Richard Heighway's illustration of the story of belling the cat, from Jacobs' edition of Aesop's fables (web source): 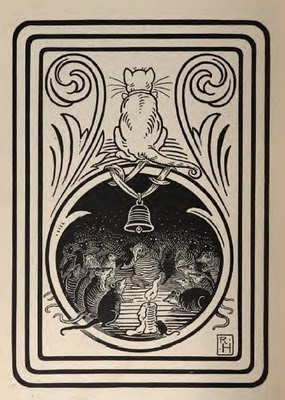