HODIE: ante diem undecimum Kalendas Augustas (and yes, you can have your own Roman Google Calendar).

LATIN AND ENGLISH FABLES: Here are today's fables in Latin AND English from the English Aesop project.
I've picked out my favorite one to share with you here in the blog, it's a bit on the long side, but it really is hilarious - The Devil and the Old Woman = Daemon et Anus:

In general when people through their own fault suffer some kind of setback, they say that it is the fault of bad luck or of the Devil, in order to escape being blamed themselves; that's how people take the easy way out. The Devil does not like this at all, so when he saw an old woman who wanted to climb a tree with her shoes on, he realized that she was going to fall out of the tree and put the blame on him, so he summoned some witnesses and said to them, "Observe that old woman who, without any advice from me, is climbing that tree from which I can see that she is going to fall. You are my witnesses that I did not urge her to climb that tree with her shoes on." The old woman soon fell down from the tree and when she was asked why she had climbed a tree with her shoes on, she said, "The Devil made me do it." Then the Devil summoned his witnesses and proved that the old woman had acted on her own, without his advice.

3-Word Proverbs: Today's 3-word proverb is Dies diem docet (English: One day teaches another - this is one of those "lifelong-learning" proverbs, and one of my personal favorites, as you can probably guess from all my "___ of the day" widgets!).

Rhyming Proverbs: Today's proverb with rhyme is: Sarcina magna nimis asinum prosternit in imis (English: A load that is far too large lays the donkey low - and the fact that this rhymes is probably of little comfort to the poor donkey!).

Elizabethan Proverb Commentary: Here is today's proverb commentary, this time by Taverner: Quod in animo sobrii est, id est in lingua ebrii: The thinge that lieth in a sobre mans harte, is in the tonge of the dronckarde. Dronkenfolke can kepe no counsaile. Wherfore it is wisedome both to kepe thy selt from that vice, lest thou utterest in they dronkenes the thinge, that afterwarde shall repent the, and also not to kepe companie with suchenot to disclose thy hart to them, that be subiecte to this foule vice, leste they happen to tourne the to displeasure.

Today's Poem: Today's poem is from one of the rhymes collected by Wegeler, with a word list at NoDictionaries.com:

For an image today, here is a picture of a fox playing dead to go with the fable The Dog and the Fox Who Played Dead = Canis et Vulpes Mortem Simulans (image source). Of course, in this image things turn out as the fox wants, making it possible for her to catch a bird to eat. That is not at all what happens in the fable! :-) 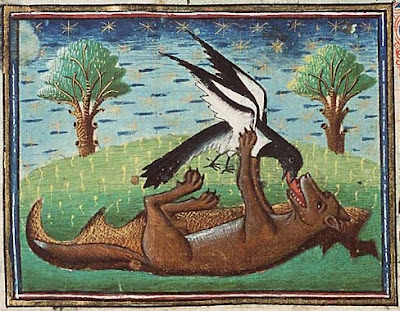