HODIE: pridie Idus Iulias (and yes, you can have your own Roman Google Calendar).

VERBUM HODIERNUM: Today's word is SIMUL - read a brief essay about the word at the Verbosum blog. Here's one of the sayings you can find in the essay: Amare simul et sapere vix deo conceditur., "It's scarcely granted even to a god to love and be wise at the same time."

LATIN AND ENGLISH FABLES: Here are today's fables in Latin AND English from the English Aesop project.
I've picked out my favorite one to share with you here in the blog, the story of The Rabbit, the Dog and the Goatherd = Lepus, Canis et Caprarius:

A dog was chasing a furry-footed rabbit that he had roused from inside a thicket, being an expert hunter as he was. In running, however, he was no match for the rabbit. A goatherd happened to see all this and said jokingly, "Has such a teeny-tiny creature turned out to be faster than you?" To which the dog replied, "It's one thing to run after something you want to catch; it's something else again to run for your life."

Tiny Proverbs: Today's tiny proverb is: Tertius Cato (English: A third Cato - which is to say a serious-minded censorius person, worthy to join the ranks of Cato the Elder and Cato the Younger).

Latin Animal Proverb: Today's animal proverb is Ex auribus cognoscitur asinus (English: You recognize a donkey by the ears - a proverb brought to life in the Aesop's fable about the donkey in the lion's skin).

Proverbs of Polydorus: Today's proverb from Polydorus is: Navigat usque ad Phasim (English: He's sailing all the way to the Phasis - the Phasis river being the proverbial end of the world; you can read about the Phasis River, modern Rioni, at Wikipedia).

Proper Name Proverb from Erasmus: Today's proper name proverb from Erasmus is Delphicus gladius (English: The Delphic sword; from Adagia 2.3.69; in Delphi, this sword could be used both for the slaying of sacrificial victims and for the punishment of wrongdoers, and by extension it came to mean any tool with many uses).

For an image today, here's a picture of the donkey with his tell-tale ears (source): 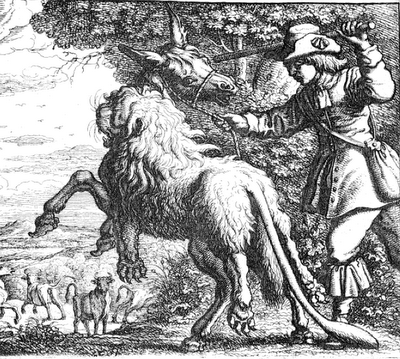