HODIE: ante diem quartum Idus Iulias (and yes, you can have your own Roman Google Calendar).

VERBUM HODIERNUM: Today's word is TALIS - read a brief essay about the word at the Verbosum blog. Here's one of the sayings you can find in the essay, a great little agriculatural metaphor - Qualis radix, tales et rami.

The donkey happened to cross paths with the lion and said to him, "Let's go up to the top of that mountain and I will show you that many animals are afraid of me, too!" The lion, laughing at the donkey's words, said, "Okay, let's go." When they got to the place, the donkey stood beside the mighty beast on a high peak and in low tones he began bellowing. When the foxes and the rabbits heard him, they started to run away. The donkey then said to the lion, "See who makes them afraid!" The lion is then said to have replied, "Perhaps your voice would have scared me, too, if I didn't know that you were a donkey."

Latin Animal Proverb: Today's animal proverb is Sero paras stabulum, taurum iam fure trahente (English: It's too late to ready the stable when the thief is already leading the bull away).

Proper Name Proverb from Erasmus: Today's proper name proverb from Erasmus is Codro pauperior (English: More poor than Codrus; from Adagia 1.6.76 - a proverb based on a wretched and miserable poet Codrus mentioned by Juvenal).

Greek Proverb of the Day: Today's proverb is Δηρὸν βουλεύειν, ἵν' ἔχῃ καὶ πολλὸν ἄμεινον (English: Deliberate for a long time so that you will fare far better).

Today's image is for that story of the donkey and the lion - you can see how the loud braying of the donkey is making the rabbits and foxes run away (image source): 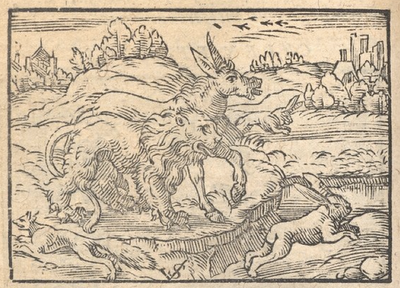