Here is a round-up of today's blog posts - and for previous posts, check out the Bestiaria Latina Blog archives. You can keep up with the latest posts by using the RSS feed, or you might prefer to subscribe by email. Plus, you can find some Latin "pipilationes" at my Proverbia Latina feed.

HODIE: ante diem septimum decimum Kalendas Maias. You can add a Roman calendar as a widget in your blog or webpage, or display it as a Google Calendar: here's how.

MORE FABLES: Here are today's fables from the Ictibus Felicibus project. These fables ALL have long marks, plus stress marks for easy reading, and the poems have meter marks, too, along with an easy-to-read prose presentation of the story:
I've picked out my favorite one, the debate between the man and the lion, Silvanus et Leo, to share with you here in the blog; for an illustration, see below.

Elizabethan Proverb Commentary: Here is today's proverb commentary, this time by Taverner: Sub omni lapide scorpius dormit: Under every stone sleepeth a Scorpion. This Proverbe admonisheth us, that wee speake not rashely and unadvisedlie amonges captiouse and calumnious persons. For what so ever wee touch, it is to be feared that they will bite it. Now certaine it is, that the Scorpions be wonte in diverse countreyes beyond the sea, to lye lurkinge under stones, whiche stones, so sone as a man uniware, take up, forthwith he receyveth a wounde of the Scorpion.

Today's Poem: Today's poem is one of the elegant little epigrams of Owen (4.218), with a word list at NoDictionaries.com:

English: "Joys come after griefs, and after joys come griefs; we are always in a doubtful state, either hoping, or fearing." I love the sound play of the final hemistich!

For an image today, here is Barlow's illustration of the debate between the man and the lion, Silvanus et Leo - and you will notice that the lion is giving the man a quite visceral proof of his superior strength as well! 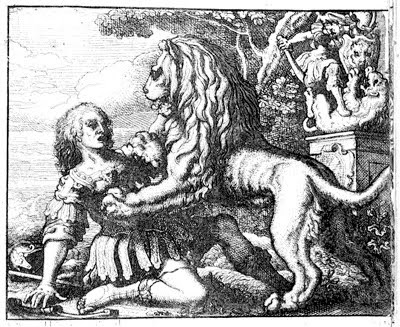