Here is a round-up of today's blog posts - and for previous posts, check out the Bestiaria Latina Blog archives. You can keep up with the latest posts by using the RSS feed, or you might prefer to subscribe by email. Plus, you can find some Latin "pipilationes" at my Proverbia Latina feed and at the IVLIVS CAESAR feed (Plutarch's Life of Caesar twittered trilingually).

HODIE: ante diem septimum decimum Kalendas Februarias. You can add a Roman calendar as a widget in your blog or webpage, or display it as a Google Calendar: here's how.

TODAY'S FABLES: Here are today's fables from the Ictibus Felicibus project. These fables ALL have long marks, plus stress marks for easy reading, and the poems have meter marks, too, along with an easy-to-read prose presentation of the story:
I've picked out my favorite one, Rusticus et Hercules, to share with you here in the blog; the original version is in elegiac couplets, but here is a version written out as prose (watch out for the passive form of the future imperative, nititor, by they way):

Tiny Proverbs: Today's tiny proverb is: Atlas caelum (English: Atlas [holds up] the sky - this tiny motto manages to leave out the verb, since by knowing the subject and the object, you can easily supply the verb).

3-Word Mottoes Verb-less: Today's 3-word verb-less motto is In veritate victoria (English: In truth, victory - a very reassuring motto for anyone who has staked all they have on defending the truth)

Proverbs of Polydorus: Today's proverb from Polydorus is: Hic navigat Anticyram (English: He's on a journey to Anticyra - which is to say, he's totally crazy; Anticyra was the place where you went to get hellebore, a drug that one might seek out in order to cure insanity as well as various physical illnesses).

Proper Name Proverb from Erasmus: Today's proper name proverb from Erasmus is Excubias agere in Naupacto (English: To keep watch in Naupactus; from Adagia 1.2.83; Erasmus explains that when Naupactus was conquered by the Achaeans, they killed the captain of the guard in charge of the watch, so this proverb refers to someone who is going to bring about their own destruction, carrying out an unwelcome task).

Greek Proverb of the Day: Today's proverb is Σὺν Ἀθηνᾷ καὶ χεῖρας κίνει (English: Move your hands too, along with Athena - an allusion to an Aesop's fable that is very similar to the story of Hercules and the farmer cited above; in this case, the story concerns a drowning man who prays to Athena to save him).

Today's image is an illustration for the saying Atlas caelum (image source), a status of Atlas from Santiago de Compostela in Spain: 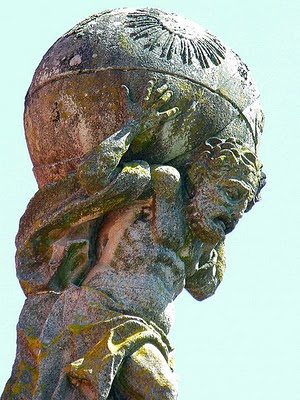