Myths and Legends: The Abduction of Helen

The Abduction of Helen. To find out more about Helen and Paris, the prince of Troy, see this Wikipedia article: link; for information about the image: image source.

These are two panels from a three-panel illustration in the 14th-century Chroniques de Saint-Denis; the left shows King Priam of Troy sending Paris away (it was prophesied that Paris would bring about the destruction of Troy, but his parents could not bear to kill him), and then Paris abducting Helen (his prize for having awarded the golden apple to Aphrodite in the contest between the three goddesses), and finally the war between the Greeks and Trojans that results (and in which Paris will lose his life, mortally wounded by Philoctetes): 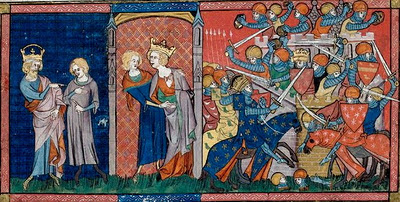 You can also find more myths and legends for the week of January 8-14 here. For more information and links to the actual javascript code, see the Myths & Legends Widget Reference Page.

Email ThisBlogThis!Share to TwitterShare to FacebookShare to Pinterest
Labels: Myths and Legends Items