HODIE: ante diem tertium decimum Kalendas Augustas (and yes, you can have your own Roman Google Calendar).

VERBUM HODIERNUM: Today's word is MATER - read a brief essay about the word at the Verbosum blog. Here's one of the sayings you can find in the essay: Nemo non formosus filius matri. , "There is no child who is not beautiful to its mother."

LATIN AND ENGLISH FABLES: Here are today's fables in Latin AND English from the English Aesop project.
I've picked out my favorite one to share with you here in the blog, the story of the mouse who "thinks outside the box," as it were, A Mouse Born in a Box = Mus in Cista Natus:

There was a mouse who was born in a box and who had led practically his whole life there, nourished on the nuts which were usually kept in that box. One day, however, when he was playing around the edge of the box he fell down and as he was looking for a way back up into the box, he discovered a feast of sumptuously prepared food which he began to eat with much enjoyment. "What a fool I was," he said, "thinking until now that there was nothing better in the whole world than my little box. But here I have found foods to eat which are much tastier by far!"

Audio Latin Proverb: Today's audio Latin proverb is Nihil annis velocius (English: Nothing is faster than the years). To read a brief essay about this proverb and to listen to the audio, visit the Latin Via Proverbs blog.

Maxims of Publilius Syrus: Today's proverb from Publilius Syrus is: Semper quiescens des iniuriae locum (English: By always taking it easy, you invite your own injury).

Animal Proverb from Erasmus: Today's animal proverb from Erasmus is Lepus dormiens (English: a sleeping rabbit; from Adagia 1.10.57 - this saying depends on a bit of ancient lore about rabbits, who supposedly sleep with their eyes open, so the phrase a "sleeping rabbit" means someone who appears to be doing one thing but who is actually doing something else).

For an image today, here is a depiction of Ceres (Greek Demeter) in honor of the fable about Ceres and the farmer cited above - plus the image even shows the prickly wheat which is the subject of the fable (image source) 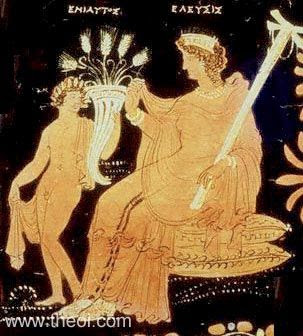